Galway is a city of extremes. It has extreme nightlife. It has extreme souvineer shops. It is also on the westernmost extreme of Europe. Indeed, if for some reason you decided to swim due West, you’d not hit land until you bumped head first into Venison Island in Canada – a place itself so remote that its wikipedia page boasts  only about the erstwhile presence of a wireless telegraph station. To the immediate East of the city lies Lough Atalia (pronounced a-tall-ee-a), a tidal lake fed directly by the Atlantic Ocean. The name, rather unimaginatively, simply translates as ‘The Salt Lake’. Take that, Utah.

It is, however, along the shores of this lake – less than a ten minute walk from Eyre Square, Galway’s pacemaker – that one can find a rather unexpected little corner of tranquility.

There are some 3,000 holy wells in Ireland – most of them having been in use for thousands of years and simply being re-branded when a new God shows up. On the shores of Lough Atalia sits one of the more unusual of these wells – the well of St. Augustine.

The current well is the only that survives of the three original wells. A roughly built stone enclosure marks out the site. At the centre, a white-washed stone circular structure is enclosed within a low stone wall. A man wearing boots and a hat that suggest he is a fisherman is leaving the site as I descend the steps from the main road. “Bless you,” he utters as we pass. I smile in response.

This small site is deserted. I am not twenty feet from a busy road and not ten minutes from the centre of a bustling city – yet I am hit with the sheer peace of this location. As if to underscore and ridiculously parody my point, a swan wanders lazily up from the salt lake and nestles himself down beside the enclosure wall. If there are cares to be had, he has none of them.

I approach the white-washed basin and peer into it. There are votive offerings inside – mainly shiny copper coins. Fresh water bubbles up from the ground below and finds its way into a ramshackle channel that brings it to the lake. When the tide comes in, the well floods and the spring disappears beneath the salt water. The grass verge gives way to seaweed. My leather shoes sink into the wet and salted gravel.

Out across the lake are the suburbs. To the right, in the near distance, I can see the fuel tankers of Galway docks. Yet the noise does not reach here.

Like all good Irish Catholic sites, this one is associated with a legend. It was here on 11th June 1673 (the Feast Day of St. Barnabie who is, of course, the Patron Saint of hail storms…) that local boy Patrick Lynch was brought by his parents to try and cure his terrible (yet unnamed) illness. And cured he was – this being Ireland. Indeed, today, I am reliably informed by the locals, that the well continues to have curative functions and is particularly good for eye and ear ailments. This in mind, I dab a little of the water on my ear to see if I can cure the long-standing strange ‘thumping’ noise I experience at night. As I write this, it is night time and there is no sound – though my ear feels as if it is in the first stages of an ear infection … perhaps I should know better than to insert water bubbling up from beneath an urban area into my orifices.

This site has also seen its share of tragedy. It was here in the 1660s that a massacre of civilians took place when Cromwelian troops were ordered to open fire on a large group of bathers – though the reason for the attack has not been recorded.

The site itself has been in use since pre-history and there is some speculation that it was associated with the Crom Dubh – the cult of what was thought to be a fertility god. Indeed, the feast days associated with this well – the last Sunday in July – is very close to the ancient veneration of the Crom Dubh – the first Sunday in August. I visit on November 5th, a date which has no meaning locally – though it is the feast day of the remarkably named Italian Saint Dominator – presumably canonized on the strength of his name alone. 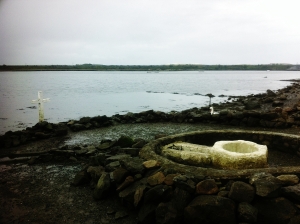 Although not particularly known for my ‘religious devotion’, I do experience a serenity at this spot. The city doesn’t exist down here. All that matters is the waters that gently emerge from the well, the smell of the salt, the lazy swan, the distant train lines. Here, my feet walk on the ground that people have walked upon for thousands of years. The oddly shaped basin, the poorly constructed channel, the beaten drystone walls … this is where ramshackle feels like a whole lot more.