It is July 2013 and it is hot. My family are staying in the forests around Gordon Wisconsin in a little trailer without air conditioning. No – wait – make that ‘bereft’. The trailer is ‘bereft’ of air conditioning. Despite the fact that the Sun has long since evaporated and turned the hot day into night, it is still equally as fevered.

I cannot sleep. Heat aside, a suburbanite such as myself does not do well in the forest. Things make noises. Cracking branches and falling leaves sound like plummeting trees and tornadoes. Foostering chipmunks sound like befuddled bears. Eyelashes appear in the half light to be Brown Recluse spiders swinging quickly on their silk before my vision – taunting me.

My childer – between them ranging from two to four years old – sleep nonchalantly. They clearly get this from their mother, sleeping noisily in a manner that I now understand is a locally-learned defense mechanism to keep noise-fearing scavengers away. This is no country for suburban Irishmen.

The trailer begins to shake. There is a rustling sound outside. What the … And then it stops. My blood is now 85% panic. My ears are patrolling. My brain is not only interpreting – but also – helpfully – embellishing every sound. What was that?

In the morning, I tell Marie of the shaking incident.

“Whatever was shaking the trailer?”

She gives a wry smile. “And it won’t eat you tonight either. You’ll be fine.”

I am more worried than ever now! Is that the classificatory test used to decide upon the level of danger posed by an animal? Did it eat me and if so, then it’s OK to be scared?? Surely it would be moot by then!

I decide to take my mind off things by bringing the kids out for a drive. Not far from the trailer is Gordon Dam park. The dam itself is an impressive steel and concrete affair that was built in the depression era as one of Roosevelt’s far sighted public works schemes. It replaced an earlier wooden dam at the location. The water from the mighty St. Croix river backs up behind the dam in a flowage before plummeting through the sluice gates into the river channel below. The kids throw sticks into it – but the water is so ferocious that they disappear into the water’s ether (the sticks – not the kids).

People are fishing. Kids are swimming (amazingly not too far from the business-side of the dam …). The Sun continues to be relentless – but there is a cool breeze that either comes directly off the flow or is created by the wings of about fifteen billion mosquitoes … either way – it’s not unpleasant. This is exactly what I needed to keep my mind off the wildlife difficulties of the previous evening.

“Look Daddy!” shouts my daughter as she lovingly frolics in the grass, pointing at an oddly shaped rock.

The rock moves as she reaches down to touch it. “Noooo! That’s a snapping turtle!” I run towards her. Luckily my hollering has sent her into a state of catatonic shock. Parenting.

I explain to her that it is a snapping turtle and could bite off her little finger for no reason stronger than spite. She receives the message – but my wildlife radar beeps a loud internal ‘told you so’ to me. We return home

It is night-time again. I lie as if wishing sleep, but am secretly on sentry duty, here to protect my family against the lurking Wisconsin fauna. I am the hero they need. I am …

The trailer begins to shake again. My eyes dart to my watch. It is 1am again. The trailer moves back and forth. I am as rigid as an overzealous sentry. And then it stops. I listen intently and do indeed hear a rustling yet again. Sleep continues inside the trailer without me …

Over breakfast, Marie listens politely to my concerns – about how a trailer is only barely structurally sound and is easily penetrable by, say, a mildly curious bear – never mind an angry one – which, by my reckoning as an expert on bears, all of them are.

“You probably heard a chipmunk and the shaking was probably just the wind. You really have nothing to worry about.”

Later that day, we are back at the dam by popular request of the kids. I am now on turtle and bear watch. So far, so good. In fact, we see nothing of any interest at all and, after a very pleasant stroll down by the water’s edge, we return to the car. I am a little taken aback at a “Don’t Shoot a Swan” sign that I see tacked to a tree – but I eventually see that it can apparently happen as a result of mistaken identity with geese. My brain quickly shuts down the

image of locals dining on lavish feasts of white-plumed delicacies.

We return home and put the kids to bed. By 8pm, they are out cold. Marie and I sit at the trailer table looking out the window and test driving a random assortment of words and sentences. The scene really is quite idyllic. We are surrounded by a birch forest. There are a few fallen logs. Some indistinguishable shoots are attempting to compete with the taller trees for sunlight. There is a quiet forest road perhaps twenty feet away…

And there is a three hundred pound bear running down the road at about 35 miles per hour.

We both stare in awe at this magnificent creature. We see his muscles ripple like a salmon stream beneath his shiny fleece of darkest black. We see his arms reach out and gobble up the roadway with speed.

A car approaches. The bear is spooked. He leaves the roadway and makes his way over towards the trailer! Now this is a close encounter!

He sees the trailer – and no doubt sees a gape-jawed Irishman looking at him through the window. I wonder if he thinks the window is merely a sneeze guard to the course of Seán contained within?

He turns, and walks off into the forest.

And then a lightbulb goes off over my head.

“Sorry”, says Marie. “It was getting dark in here.”

“No problem – but I have an idea! The bear! This trailer! The trailer hasn’t been here that long. I wonder if it’s parked in a natural pathway that he uses? After all – he came straight for us and then turned away. I wonder if he’s using the trail at night, bumping into the trailer and having to awkwardly stand on two legs to make his way around the trailer – between it and the trees? Is that what’s rocking it?”

“Sounds possible! I mean – wow! What a fantastic thing to see!” 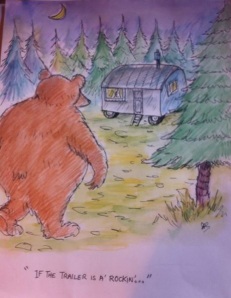 ‘Bear’, with thanks to Dave Coleman

It is approaching 1am. I am the only person still awake. I am listening intently. The glass on the window immediately beside my bed is open to allow cool air to come in. There is a mesh screen in place – the only thing separating me from things that want to eat me. I listen through it for footsteps…

The trailer begins to rock back and forth. I sit bolt upright. I can hear a rustling. I throw open the blinds to see …nothing. For it is 1am – the middle of the night – in a dark forest. What did I think I was going to be able to see?

But then a thought strikes me … I might – at least – be able to hear him.

So I put my ear right up to the mesh …

And the nose of a bear breathes right into it …

My heart forgets to beat.

“Marie! Marie!”, I should in my loudest whisper.

“What? What is it?” she says, very reluctantly rousing from her sleep. Over the years, she has made it very clear to me that sleep-rousing is pretty much a cardinal sin. Oh I’ve seen comets, shooting stars, mysterious things aflying in the sky … but I’ve seen them all alone. She must not be woken. However, I feel that a bear’s nose in my ear probably counts as acceptable exception.

“The bear! He’s sniffing in my ear through the mesh!”

Marie turns to me and, in a clearly annoyed voice, says “The bear is only a problem because you’re still awake.” With that, she turns back on her ‘away from me’ side and is instantly back asleep.

The bear withdraws. I listen to him pad this way through the leaves – away from me and my potentially delicious ear … and towards the bins, where he spends the next few hours gorging himself on the contents of my son’s used diaper bag.

One thought on “The Bear”