This week, I thought I’d share with you three little-known bubbles in the pint that is my home city of Dublin. They are not the type of thing that you’d find on a postcard (such as an address or a stamp …) but they are places that, for me, enrich the city. Two will amuse – one in a creepy way, admittedly – and the final one will break your heart. Unless you’re a heartless jellyfish. In which case it will break your Stomach Pouch.

We’re all familiar with the images of pirates, clowns and monkeys that are rendered headless and displayed for children – not in a gruesome way, mind you – but in a manner that invites children to substitute their head in its place to have a photo taken and to teach them the valuable life lesson that impersonation is, somehow, a life skill so important that we introduce them to it during their formative years.

Dublin Zoo has a couple of these. There is a – literally – faceless Orang-Utan cutout that is fairly typical of your average zoo. No surprises there. It is two dimensional, cartoonish in appearance, and appears to be more of a draw than the actual Orang-Utan sitting not twenty feet from it.

The Orang-Utan is what you’d expect. What you’d not expect, however, is the faceless cut out at the penguin enclosure…

First of all, the penguin is not a simple cut out. It is a properly carved three-dimensional figure from which the face has been carved out. It therefore resembles a living penguin who has received a shotgun blast that has removed his face entirely from his skull and gives the appearance that his body is standing for a few post-blast seconds before it crumples to the ground – yet another victim of a senseless avian gangland hit. 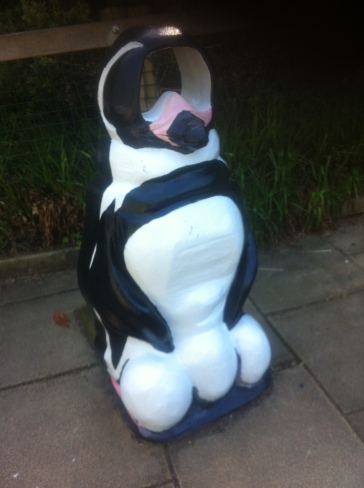 … but it gets worse. When I bent down to get a picture from a different angle, two horrid cyborgian eyes appeared – poorly placed bolts on a nearby fence. This is the Alexander Murphy of the penguin world …. 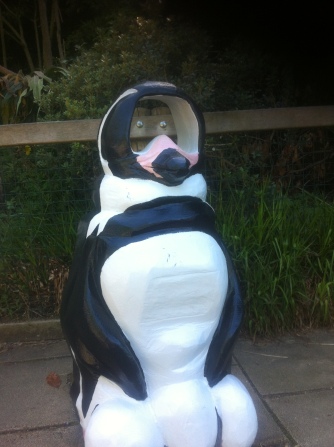 A burl is a term that I’ve only recently discovered. It refers to those dreadful growths on trees that look like overswelled woody elbow skin pustules that we’ve all seen. They, apparently, the result of virus attacks on trees and can grow to enormous sizes.

Some directions: Beginning at the Wellington Monument in the Phoenix Park, walk out in a South-West direction – down the little slope and into the trees.

There, you will find one of Dublin’s least known – but most intriguing sights: The Ass Tree. 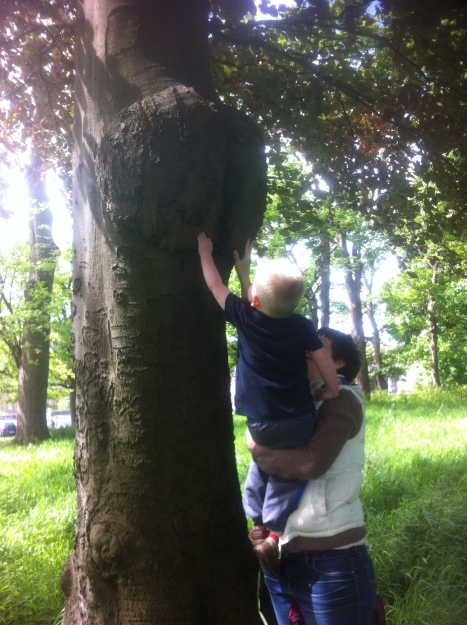 Touching the Ass Tree: Check Out The Burl On Me!

Some (i.e., me) say that touching it can cure a whole manner of posterior problems, including Macaque Bottom Syndrome(also known as Anus Horribilis) , Excessive Barnacles and Recto Large-o – although this last one is cured mainly because finding the Ass Tree involves walking …

Dublin has a rather wonderful Natural History museum. It is rather wonderful because it is, essentially, a museum of a museum. It not only feels like a lost piece of Victoriana – many of its exhibits date from that very time. Some of the exhibits – such as the Tasmanian Tiger – have even become extinct during the lifespan of the museum.

Sitting in the back left corner of the first floor, however, is one of the saddest things you will ever see. The museum appears to be a trophy room for a particularly overzealous safari in the 1800s. Nothing points to this zealousness more than the exhibit in this old victorian case. The animal – so old that its once black fur is beginning to fade to a browny red – is a zebra. A tiny little baby zebra. Sitting. All alone. In the corner of the display case. A full thirty feet from another case that displays what was presumably his mother. 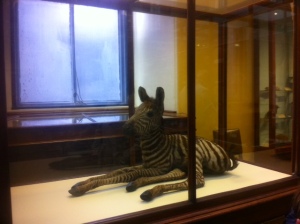