Today, I decided to revisit a carpark that I had visited as a child. Carparks can be surprisingly interesting places. They are, for example, a good place to start looking if you’ve lost an English monarch. They work equally well, as Richard Nixon discovered, as a place to pass on information to bring down a US President.

Unbeknownst to most of the Western world, but long understood in Ireland, however, is the fact that carparks are, apparently, also good places to take children on school trips. While children in more salubrious educational establishments were being taken to zoos with living examples of animals long extinct, kids in my income bracket were being taken to visit government department buildings and their associated grey carparks.

One occasion in particular comes to mind. It was 1985. I was seven years old – but I remember the year vividly. Barry McGuigan and Ronald Reagan had shared the Oscar for best supporting actress in the movie Amadaeus, Bob Geldof discovered the missing wreck of the Titanic, and acid rain had fallen on Gorbachev, permanently ensplotchifying a piece of his forehead.

That September, our school tour was to involve a childhood highlight: a tour of Dublin’s pollution landmarks. And so, following a presentation at a government department concerning acid rain and that showed lots of pictures of industrial chimneys and dying frogs, we were taken on a walk around Dublin to see its effects. We saw a little stone erosion here, the occasional melting pensioner there – all evidence of the acidic plague. But the Pièce de résistance was a visit to the carpark behind St. Andrew’s Church on Suffolk Street to see a statue of St. Andrew himself that had been so harshly flogged and walloped by this pickled precipitation that it had reduced the once proud apostolic figure to little more than the form of a common blancmange.

St. Andrew. I was going to wittily suggest him as a candidate for the Patron Saint of Carparks. Apparently, however, St. Otto already holds this inexplicable title …

Had he been human and not a statue, or, indeed, had we have cared, it would have been quite a harrowing experience. Poor St. Andrew had lost most of his facial features. His beard seemed improbably weather-beaten. His robes had been divested of definition. It was, in a word, sad. 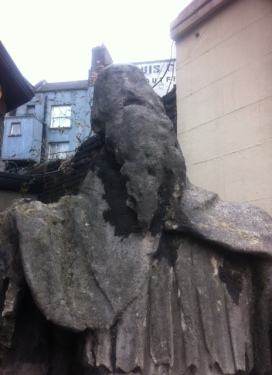 It had always bothered me, though. Yes – Dublin was particularly pollution-ridden at the time and my memories of it from the 1980’s are soot-covered. But nothing else had been as badly damaged as the St. Andrew statue. So what was it about this exact spot that had so angered Taranis? What, exactly, had St. Andrew done? And why did no other statue in Dublin look like it was made from particularly-lumpy porridge?

Years later, my interest in the statue was revived when I worked for a season on Dublin’s red-top tour busses. Every day, I would pass St. Andrew four times a day and look at his fading features forlornly focusing on the floor. Acid rain just didn’t seem to explain it.

I did a little research on the church – now converted to Dublin’s tourist centre – but still with the forgotten Andrew in the depths of depression in the carpark out back.This is the third St. Andrew’s church. The statue was carved in 1803 and placed above the church entrance, where it stood until 1860 before a fire gutted the building. When it was re-built, they simply placed the statue in the corner of the yard.

Ok so – fire was involved. Surely the heat would have played a part?

Further research told me that the church was frequented by members of parliament, the upper classes and members of Daly’s clubhouse. This last was of particular interest to me. Daly’s was a gentlemen’s club with a particular reputation for outrageousness. Basically a sanctum of illicit pleasure for the rich and powerful, it was famed for gambling stories that ended with sentences such as “… and they threw him out of the top window.” Also of note is the fact that Daly’s stood (and still stands) just a short distance away on Dame Street.

Daly’s was also famous – or infamous – for duels breaking out. In Ireland, duels were serious business. In fact, it was the Irish duelling rules that more or less governed the practice across the English-speaking world. (http://www.pbs.org/wgbh/amex/duel/sfeature/rulesofdueling.html)

In other parts of the Empire, the duel was not particularly fatal. It served as more of a mechanism to ‘vent’ than to kill. In London, about one in fourteen duels were fatal. In Ireland, however, it was closer to one in four …

Simple. In London, practicing was frowned upon. Yet, it seems, the Irish took a different view of it. Gambling in Daly’s was a significant contributor to the duelling statistics. But where are you going to practice for a duel in a city centre?